To the bamboo lattice of my study-window a single dewdrop hangs quivering. Its tiny sphere repeats the colours of the morning,—colours of sky and field and far-off trees. Inverted images of these can be discerned in it,—also the microscopic picture of a cottage, upside down, with children at play before the door.

Much more than the visible world is imaged by that dewdrop: the world invisible, of infinite mystery, is likewise therein repeated. And without as within the drop there is motion unceasing,—motion forever incomprehensible of atoms and forces,—faint shiverings also, making prismatic reply to touches of air and sun.

Buddhism finds in such a dewdrop the symbol of that other microcosm which has been called the Soul…. What more, indeed, is man than just such a temporary orbing of viewless ultimates,—imaging sky and land and life,—filled with perpetual mysterious shudderings,—and responding in some wise to every stir of the ghostly forces that environ him?…

Soon that tiny globe of light, with all its fairy tints and topsy-turvy picturings, will have vanished away. Even so, within another little while, you and I must likewise dissolve and disappear.

By the great sun its atoms are separated and lifted and scattered. To cloud and earth, to river and sea they go; and out of land and stream and sea again they will be updrawn, only to fall and to scatter anew. They will creep in opalescent mists;—they will whiten in frost and hail and snow;—they will reflect again the forms and the colours of the macrocosm; they will throb to the ruby pulsing of hearts that are yet unborn. For each one of them must combine again with countless kindred atoms for the making of other drops,—drops of dew and rain and sap, of blood and sweat and tears….

How many times? Billions of ages before our sun began to burn, those atoms probably moved in other drops, reflecting the sky-tints and the earth-colours of worlds in some past universe. And after this present universe shall have vanished out of Space, those very same atoms—by virtue of the forces incomprehensible that made them—will probably continue to sphere in dews that will shadow the morning beauty of planets yet to be.

Even so with the particles of that composite which you term your very Self. Before the hosts of heaven the atoms of you were—and thrilled,—and quickened,—and reflected appearances of things. And when all the stars of the visible Night shall have burnt themselves out, those atoms will doubtless again take part in the orbing of Mind,—will tremble again in thoughts, emotions, memories,—in all the joys and pains of lives still to be lived in worlds still to be evolved….

Your personality?—your peculiarity? That is to say, your ideas, sentiments, recollections?—your very particular hopes and fears and loves and hates? Why, in each of a trillion of dewdrops there must be differences infinitesimal of atom-thrilling and of reflection. And in every one of the countless pearls of ghostly vapour updrawn from the Sea of Birth and Death there are like infinitesimal peculiarities. Your personality signifies, in the eternal order, just as much as the especial motion of molecules in the shivering of any single drop. Perhaps in no other drop will the thrilling and the picturing be ever exactly the same; but the dews will continue to gather and to fall, and there will always be quivering pictures … The very delusion of delusions is the idea of death as loss.

There is no loss—because there is not any Self that can be lost. Whatsoever was, that you have been;—whatsoever is, that you are;—whatsoever will be, that you must become. Personality!—individuality!—the ghosts of a dream in a dream! Life infinite only there is; and all that appears to be is but the thrilling of it,—sun, moon, and stars,—earth, sky, and sea,—and Mind and Man, and Space and Time. All of them are shadows. The shadows come and go;—the Shadow-Maker shapes forever. 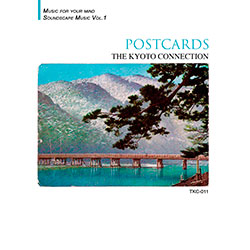 Unexpected Music Gifts on Twitter
May 4, 2020
In "Inspiration"
Categorised in: Inspiration, Reads

When you realize nothing is lacking, the whole world belongs to you.